This article appears in the April 2009 issue of CR. Mery Cuesta is an art curator based in Barcelona. Graphic designer Jordi Duró heads Barcelona-based Duró. 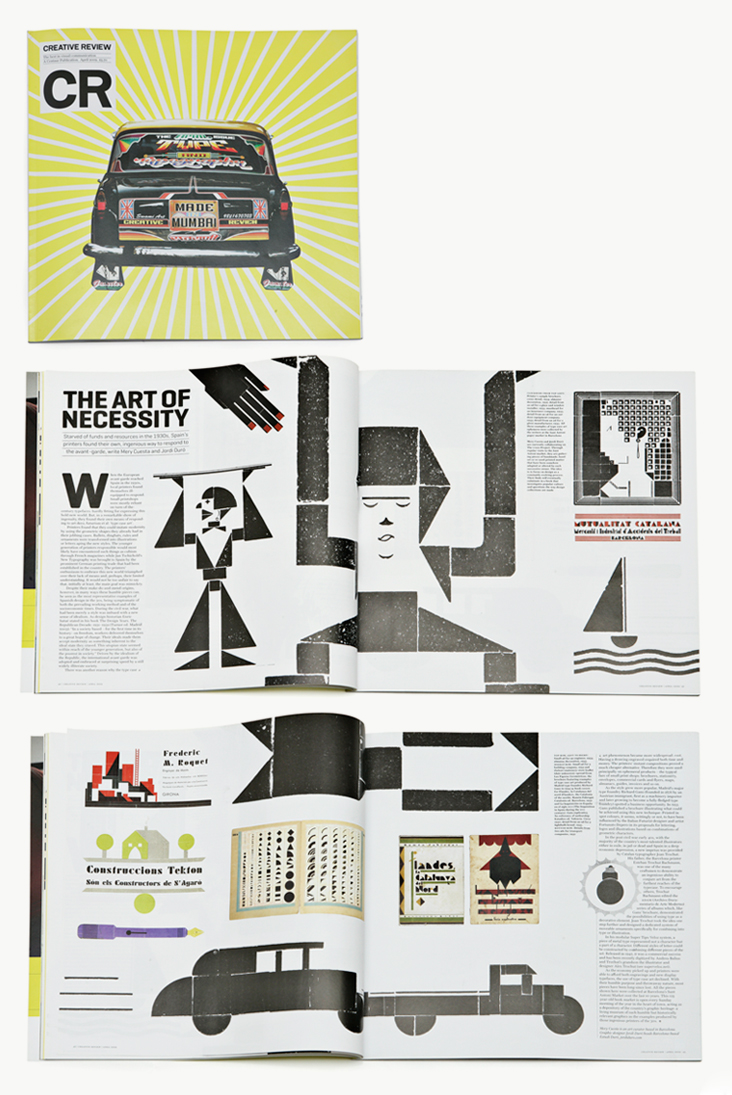 When the European avant-garde reached Spain in the 1930s, local printers found themselves ill-equipped to respond. Small printshops were mostly reliant on turn-of-the century typefaces: hardly fitting for expressing this bold new world. But, in a remarkable show of ingenuity, they found their own means of responding to art deco, futurism et al: ‘type case art’.

Printers found that they could imitate modernity by using the geometric shapes they already had in their jobbing cases. Bullets, dingbats, rules and ornaments were transformed into illustrations or letters aping the new styles. The younger generation of printers responsible would most likely have encountered such things as cubism through French magazines while Jan Tschichold’s New Typography was brought to Spain by the prominent German printing trade that had been established in the country. The printers’ enthusiasm to embrace this new world triumphed over their lack of means and, perhaps, their limited understanding. It would not be too unfair to say that, initially at least, the main goal was mimickry.

Despite their make-do-and-mend origins, however, in many ways these humble pieces can be seen as the most representative examples of Spanish design in the 30s, being symptomatic of both the prevailing working method and of the socioeconomic times. During the civil war, what had been merely a style was imbued with a new sense of idealism. As design historian Enric Satué stated in his book The Design Years. The Republican Decade: 1931–1939 (Turner ed. Madrid 2003): “In a society based – for the first time in its history– on freedom, workers delivered themselves to a great hope of change. Their ideals made them accept modernity as something inherent to the ideal state they craved. This utopian state seemed within reach of the younger generation, but also of the poorest in society.” Driven by the idealism of the Republic, the international avant-garde was adopted and embraced at surprising speed by a still widely illiterate society.
There was another reason why the type case art phenomenon became more widespread: cost. Having a drawing engraved required both time and money. The printers’ instant compositions proved a much cheaper alternative. Therefore they were used principally on ephemeral products – the typical fare of small print shops: brochures, stationery, envelopes, commercial cards and flyers, maps, almanacs, guides, invoices and so on.
As the style grew more popular, Madrid’s major type foundry Richard Gans (founded in 1878 by an Austrian immigrant, first as a machinery importer and later growing to become a fully-fledged type foundry) spotted a business opportunity. In 1933 Gans published a brochure illustrating what could be achieved using this new technique. Printed in spot colours, it seems, wittingly or not, to have been influenced by the Italian Futurist designer and artist Fortunato Depero in its proposals for lettering, logos and illustrations based on combinations of geometric characters.
In the post civil war early 40s, with the majority of the country’s most talented illustrators either in exile, in jail or dead and Spain in a deep economic depression, a new impetus was provided by Catalan typographer Joan Trochut. His father, the Barcelona printer Esteban Trochut Bachmann, was one of the many craftsmen to demonstrate an ingenious ability to conjure art from the farthest reaches of the typecase. To encourage others, Trochut Bachmann edited the ADAM (Archivo Documentario de Arte Moderno) series of albums which, like Gans’ brochure, demonstrated the possibilities of using type as a decorative element. Joan Trochut took the idea one step further and designed a dedicated system of moveable ornaments specifically for combining into type or illustration.

In his modular Super Tipo Veloz system, a piece of metal type represented not a character but a part of a character. Different styles of letter could be constructed by combining different pieces of the set. Released in 1942, it was a commercial success and has been recently digitized by Andreu Balius and Trochut’s grandson the illustrator and designer Alex Trochut (see superveloz.net).

As the economy picked up and printers were able to afford both engravings and new display typefaces, the use of type case art declined. With their humble purpose and throwaway nature, most examples have been long-since lost. All the examples shown here were collected at Barcelona’s Sant Antoni Market over the last 10 years. This 125 year-old book market is open every Sunday morning of the year in the heart of town, acting as a depository of the country’s graphic heritage: a living museum of such humble but historically relevant graphics as the examples produced by those ingenious printers of the 30s.