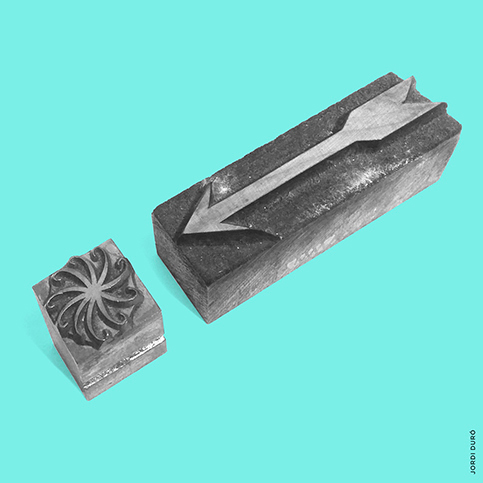 The leaflets that Ricard Giralt-Miracle printed to announce the closing of its printing business during the Christmas and summer holidays are amongst the best things printed in Spain during the fifties and sixties. They were pieces both designed and printed by him.

On these plaquettes, modest by definition, G-M found the freedom to combine texts and images in a way never seen before: the designer was for the first time also editor and printer.

They weren’t only do-it-yourself because he printed them out with his own typographic equipment, but because their graphic contents –paint brush drawings, metal typographies or old lithographic motifs– were part of his archive or artistic repertoire. They were part of the material he had on his hands on a daily basis and didn’t suppose an extra cost when it came to printing. Cheap material he put to good use by meticulously choosing the papers and finishing touches until they resulted in little gems that his friends and clients eagerly awaited.

The motifs and watermarks he used were, quite often, drawings made by his father, Francesc Giralt, remarkable lithographic engraver and in charge of the legendary Seix Barral press in Barcelona. Ricard started working there when he was fifteen, not long before the universal exhibition of 1929. In 1947, after war, exile and prisoner camps, he returned to Barcelona and founded Filograf, where he worked until his death in 1994.

The composition of typographic texts with old engravings, linoleums and his own drawings made with paint brush –elements which were totally different between them– took him to formulate a theory that he called a “Western Ikebana”. Based on the idea of Japanese floral art, he took into account distribution and the use of white and colour to get the most balanced and delicate effect possible among the elements making up the page.

Giralt-Miracle links the Catalan 19th century tradition with international design of the second half of the 20th century. He is related too to the most interesting movements in post-war Barcelona: the Dau al Set group (his influence on Tharrats’ prints is obvious) and the architecture group R.

This intellectual awareness is visible too on the texts and poems he chose for his plaquettes. He used authors such as Maragall, Riba, Carner and Foix, together with Biblical psalms or classics like Lope de Vega. Quotes he always selected from his favourite reads.

The spirit of the total artist that he so admired in Alexandre de Riquer was alive in his most experimental works. In his own words: “After computers, something else will come and there too will be craftsmen of this thing, poets who will write beautiful verses, and there will be other people, a kind of loyal minority, that will fly the kites they have built at home, and will fly them with the purest thrill. I believe this with all my conviction.”

Seen today, his printouts look totally contemporary. As much as for their graphic quality as for the D-I-Y ethics that he knew how to take advantage of, ahead of his time.