Jordi Duró has been publishing his Graphic Opinion section ever since the Ara newspaper was founded in 2010. Through the years his collaboration has intensified, and currently, we also provide from the studio consulting services and proposals on a creative as well as content-oriented basis.

Paris was again the epicenter of terror in Europe. The terrorist attacks that hit the French capital shaped this monographic issue of Ara. The direction of the newspaper wanted to emphasize the unity of all democrats against the attack. That is why we designed a cover putting special attention to the first person plural: 'Nous sommes Paris'.

We are all Charlie

The terrorist attack in Paris against the editorial staff of the satirical magazine Charlie Hebdo was approached in the Ara newspaper editorial as an attack on freedom of speech. That was our communication target, without delving into the event itself, and that is how it was shown on the cover. This cover was recognised by Newseum (Washington museum of news and journalism) as one of the ten best covers worldwide that day. 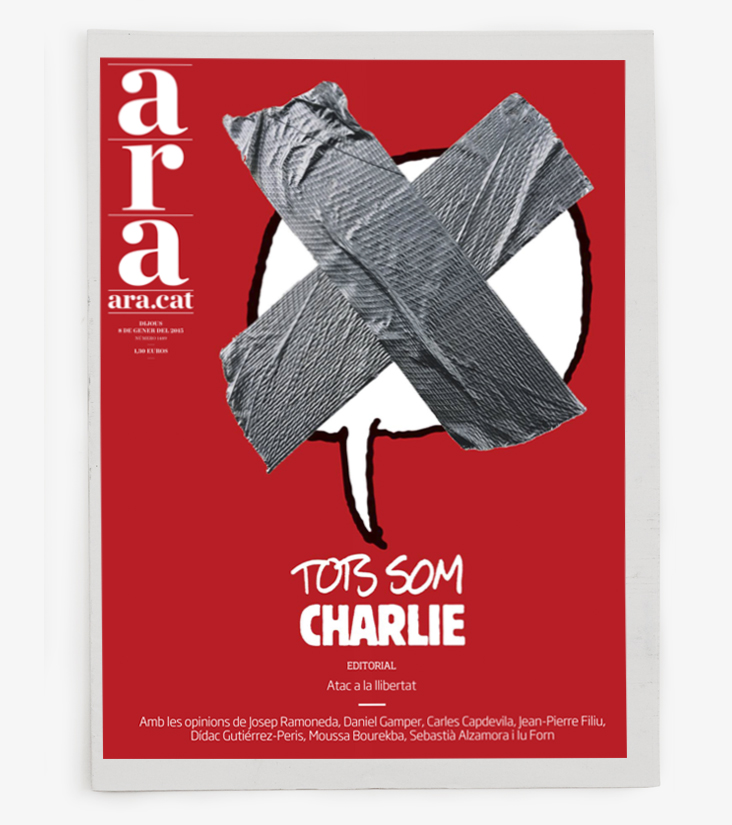 We decide the future

The National Day of Catalonia 2014 had a marked vindicating character. The newspaper wanted to explore five different points of view on the country’s future possibilities, providing every option and possible scenario for an in depth understanding of the situation of Catalonia.
We decided to approach each cover with actions performed with hands as a symbol of the participation of the people, thus providing a closer and more honest view. 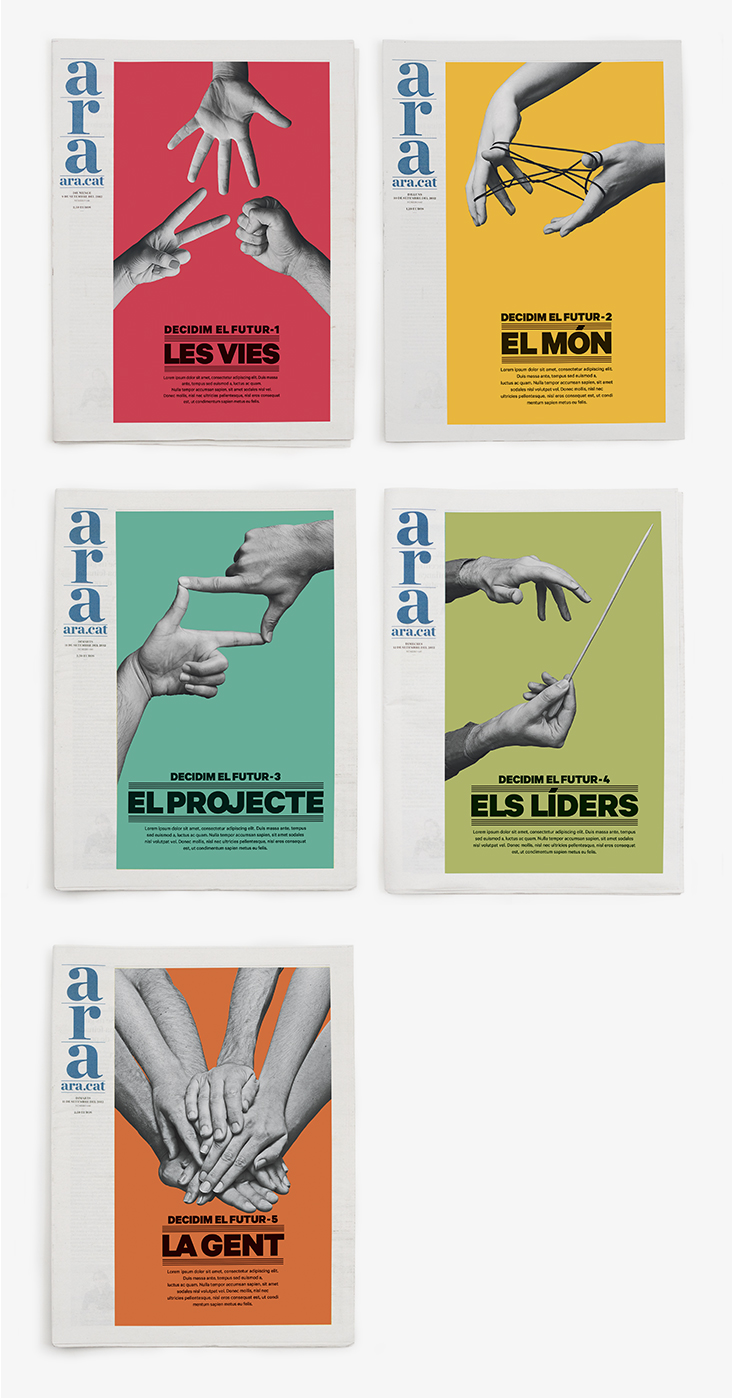 The cover on the day of the parliamentary election was approached –needless to say– as a call for participation, seeing that the newspaper could not take a stand on any political option. At a time of intense political debate, we wanted to emphasize that it was the citizen’s turn to raise a hand and decide. 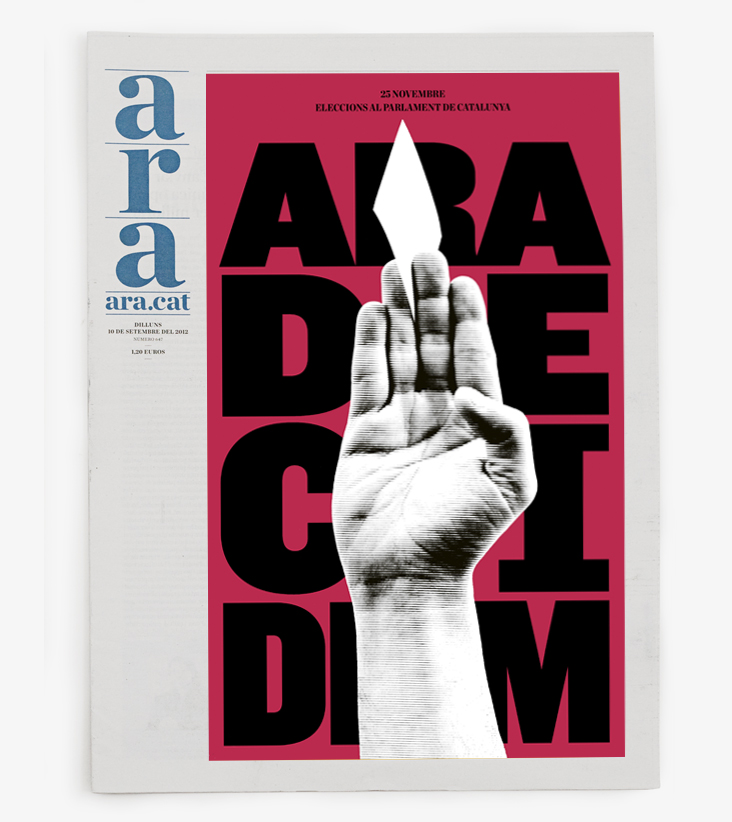 The country we want now

On september 2013, the Ara Newspaper (meaning “now” in Catalan) was planning four special issues on four consecutive days covering the Diada Nacional de Cataluña (National Day of Catalonia). The aim was to analyze the country in four steps: reasoning it (I), portraying it (II), questioning it (III) and, lastly, imagining it (IV).

We decided that the heading of each front page should be as striking as possible, so we set the typography as a strong headline and substituted a picture for a letter in the key word. In this way we were able not only to give maximum importance to the headline, but also to reinforce the concept of transmitting a visual element.

The newspaper launched a special issue devoted to positive attitudes in times of crisis, where it analyzes twelve cases of successful people who have achieved their goals in spite of prevailing difficulties.

In order to represent this message graphically, we connected the concepts of “success” (éxito in Spanish) with “exit” in English. 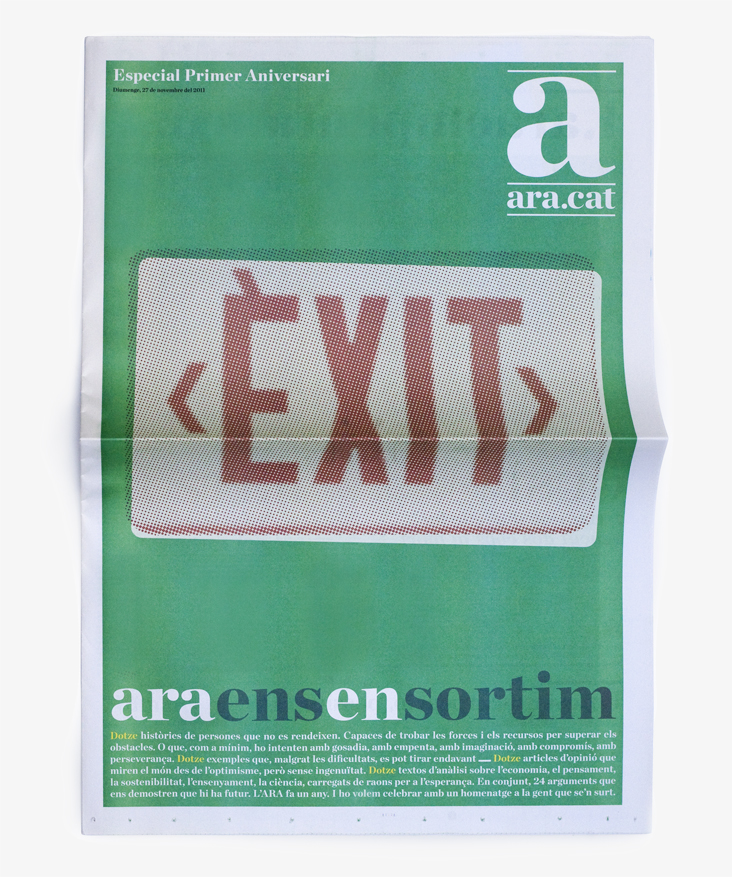 The newspaper asked us to design its front page on the day of general elections. Forecasts were that the PP (Spanish People’s Party) would win by an absolute majority, except in Catalonia, where this party usually has a relatively low backing.

We focused on this idea of the difference between Catalonia and the rest of Spain, and added a negative connotation regarding the “rain” that was metaphorically about to fall around the country. The colors blue (for the PP) and white (for the uncertainty of what would happen in Catalonia) where the keys to the result that was anticipated.

The newspaper published a supplement on the Catalan school model and assigned us the front page design for this special issue.

The front page transmitted this concept with a marked epic tone provided by the inclusion of a set of pencils joining forces.